I visited Alaska in April 2014. We went from Vancouver with Cruiser.

After one day at the see, we came to Ketchikan, the southeastern most city in Alaska. With a population of 8,050 within the city limits, it is the sixth-most populous city in the state. The city is known as the Salmon Capital of the World. Commercial fishing is one of the city economy bases. In the past, Ketchikan creek served as a summer fishing camp for Tlingit natives for untold years before the town was established.

Ketchikan has the world’s largest collection of standing totem poles. These totems reminded me on my childhood and love I had toward comic books about native American Indians.

After Ketchikan, our next goal was the City and Borough of Juneau. It is the capital city of Alaska and the second largest city in the United States by area. The area of Juneau is larger than that of Rhode Island and Delaware individually and almost as large as the two states combined.

Downtown Juneau is nestled at the base of Mount Juneau  and across the channel from Douglas Island. The City and Borough had a population of 31,275. Between the months of May and September, the daily population of the city can increase by roughly 6,000 people from visiting cruise ships.

Honestly, I didn’t like the city by itself, but surrounding area was incredible. So I used this opportunity to rent a mountain bike a explore trails in the hills. I experienced downhill at Granite Creek Trail, and even caught on tape. You can read and watch about downhill by click here.

Then we went to the Skagway. It is a first-class borough in Alaska. The population is 920.

However, the population doubles in the summer tourist season in order to deal with more than 900,000 visitors.

The port of Skagway is a popular stop for cruise ships and the tourist trade is a big part of the business of Skagway. It is so beautiful here, that you almost wish never to go home.

College Fjord was the first fjord on our way. It contains five tidewaters glaciers (that terminate in water), five large valley glaciers, and dozens of smaller glaciers.

In 1964 College Fjord was the epicenter of the most powerful earthquake in US history. It is also popular destination for cruise ships. From one place, it is possible to see eight of College Fjords Glaciers at once.

Whittier city is also a port for the Alaska Marine Highway. It is a ferry service operated by the government. Ferries serve communities in Southeast Alaska that have no road access, and the vessels can transport people, freight, and vehicles.

And finally we came to the Hubbard Glacier. It is incredibly huge and long. The size of a ten-story building. Where the glacier meets the shore, most of the ice is below the waterline, and newly calved icebergs can shoot up quite dramatically, so that ships must keep their distance from it as they ply their way up and down the coast.

When you look at the glacier, you have the filling like it looks back at you. It is not a pleasant filling. At that moment you realize how stupid it was driving Titanic between ice cubes in the full speed. Hitting Hubbard glacier with our cruiser would be the same thing as if ameba attacks the elephant.

During our visit, we were lucky enough to catch the moment when part of the glacier collapse in the water. Sound, maybe better word is rumble, makes you fill frighten. Enjoy in the video clip 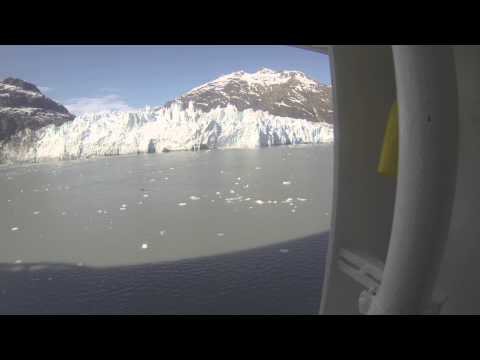 And a little bit about this monument of nature from Wikipedia:

Before it reaches the sea, Hubbard is joined by the Valerie Glacier to the west, which, through forward surges of its own ice, has contributed to the advance of the ice flow that experts believe will eventually dam the Russell Fjord from Disenchantment Bay waters.

The Hubbard Glacier ice margin has continued to advance for about a century. In May 1986, the Hubbard Glacier surged forward, blocking the outlet of Russell Fjord and creating “Russell Lake.” All that summer the new lake filled with runoff; its water level rose 25 meters (82 ft), and the decrease in salinity threatened its sea life.

Around midnight on October 8 the dam began to give way. In the next 24 hours an estimated 5.3 cubic kilometers (1.3 cu mi) of water gushed through the gap, and the fjord was reconnected to the ocean at its previous level. This was the second largest glacial lake out flood (GLOF) in recorded history, and had the equivalent flow of about 35 Niagara Falls.

In spring 2002, the glacier again approached Bert Point. It pushed a terminal moraine ahead of its face and closed the opening again in July. On August 14, the terminal moraine was washed away after rains had raised the water level behind the dam it formed to 18 m (59 ft) above sea level. The fjord could become dammed again, and perhaps permanently. If this happens, the fjord could overflow its southern banks and drain through the Situk River instead, threatening trout habitat and a local airport.